I wouldn’t expect it to be like 8th edition. More like AOS 2.0 where all the books stay current with the exception of the main rule book which is fine tuned.
From a business point of view having a new edition next year seems like the only logical outcome in my opinion.

Then another dude that also post low key, but is spot on:

V9 in June after PA

Then come out of the codices

By Kythnos (Alter Fluff-Spieler) Date 22.11.2019 - 15:29
KiriothTV
1 hour ago (edited)
If you're short on time, or need a list for purposes of copy pasting, here's the information:
- The Black Templars vs Orks box is incorrect, there is apparently going to be a Space Wolves vs Orks box.
- In addition to this box, Ghazgull is getting a new bigger model, but I’m not entirely sure if he’ll be included in this box.
- This Space Wolves vs Orks box is going to be THE box that promotes 9th edition.
- All the races are getting new ‘8.5’ codices that will be compatible with 9th edition that will be releasing next year.
- 9th edition is not going to be a radical change, but more minor rules changes and additional ideas. Do not expect alternate activations or major fundamental changes in the new edition.
- A closer release is going to be a new Illuminor Szeras model. No details on it's appearance, but it’ll have a new 80mm base and be a centrepiece Necron HQ.
- Melee Primaris will appear sometime next year as part of 9th Edition. 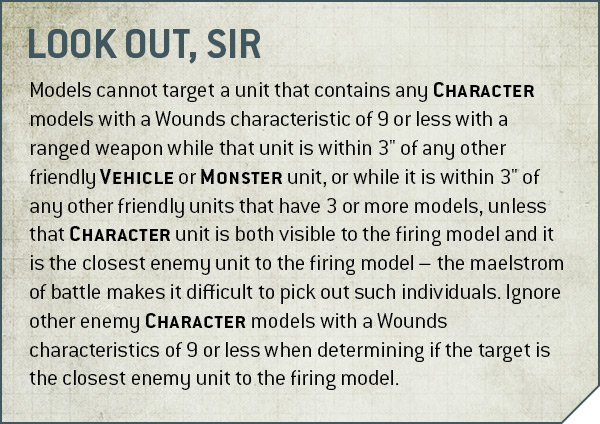 * In the new edition, your charge roll has to be sufficient to reach ALL of the units you have declared a charge against, otherwise your charge is unsuccessful and no models are moved.

September a new edition will drop and Necrons will be the new bad guys in the block.

Some finecast units might get redone, i think the flayers were brought up.

There are rumours of a new Necron codex aswell for 9th.

A new edition cycle will begin, so ya know what to expect, we have been trough this for a few times now.

The Circle of Life.

Much more fun to play with terrain; the terrain will have a fun impact on the game. The battlefield itslelf will become the 3rd player of the game. Not just layering of extra complexities - it's clean and simple but with maximum impact. Most obvious is giving a piece of terrain the "obscuring" tag which blocks line of sight. Different degrees of cover, can go up it, can pass through it, etc. Wanted woods to be different than buildings, then craters, then swamps.

Fixed interactions where a monster can't reach you on the 2nd story because you blocked out the floor. Fixed a lot of the "gamey aspects" of terrain.

More guidelines on how much terrain is on the table

Can spend CP to put units into reserve. You command points are used to do things your general would do as well. Can promote units. Reserve - come in on your board edge, or table edges. Keep things off the board until you want to use them. Gives a boost to melee armies.

Anything Tanks can do Monsters can do if not better.

Is random number of shots still a thing? Yes.

40k rules team is now making the rules for ALL models - so no more seperate ForgeWorld rules team.

Vigilus books will still be used

Where will i get rules for the new space marines and necrons? In the boxes and future codices.

They are working on new codices.

can i always hit on 6s? Everyone can now hit on 6s.

Core Rules are a bit longer (8 pages in 8th), some of that is due to expanding the rules and also because there are more examples. Tried to make the rules more concise. A bit longer but still pretty tight. Has a rules appendix - things that happen very rarely and are odd interactions. Put them in an appendix so they aren't in the core rules.

Capped modifiers; never better than +1 or -1.

Changed how flyers interact in the game. Can leave the board, not interact in the same way that infantry and vehicles on the battlefield. Shouldn't be any more gamey things you can do with them. More fun to use and less annoying against them.

Any changes to how moral works? yes. Nothing drastic - introduced 'combat attrition'; and more things that interact with morale. And armies that had morale mechanics are more powerful.

More units added to warhammer legends? Over time, almost certainly. But it will be gradual. No plans for carving great chunks out of codices.

How will command points work? Some armies have easy access to them and others didn't, they wanted to level the playing field. The command point totals are now linked to the size of the battle. Both armies will start with the same amount.

Power levels will be realigned regularly like match points are.

Will soup still be viable? Yes. But if you want to take cool stuff from 2 codices, you're spending CPs to bring those pieces. Gives Narrative players more CPs to spend and gives competitive players more options for resource management and list tinkering.

Will future codices absorb some of the rules from Psychic Awakening and Vigilus? The new codices will take all the cool stuff from supplements and incorporate them. Not every stratagem may make the cut.

With the changes to Command points, will i still need to include troops in my army? In the same way you do now i guess, but you'll have more flexibility. You don't have to do anything. Right now, you're trying to maximize command points by unlocking as many battalions as possible. But you're not doing that now. Hopefully will see people bringing the models they want to take and not what they feel like they have to take.

What's your favorite thing about the new addition? Stu: 2 things - 1 is terrain and excited about how terrain impacts a game. The other is the crusade content - those who have a slightly more narative lean for gaming. A method and tool box for telling cool stories over time. Pete: Encouraged by the balanced missions and being on the cutting edge of competitive wargamming and changes to command points to improve flexibility

>With the changes to Command points, will i still need to include troops in my army? In the same way you do now i guess, but you'll have more flexibility. You don't have to do anything. Right now, you're trying to maximize command points by unlocking as many battalions as possible. But you're not doing that now. Hopefully will see people bringing the models they want to take and not what they feel like they have to take. 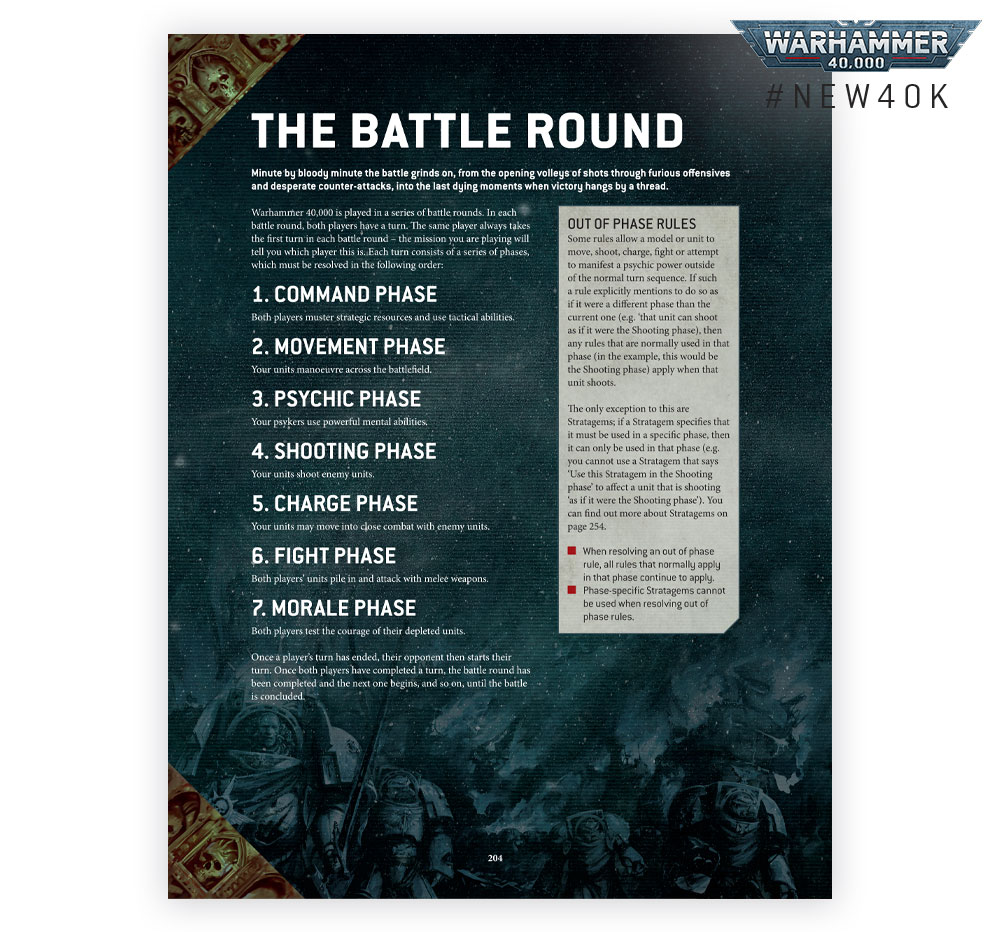 - Mission Packs; all of the missions people will encounter are contained in a pack. Three in the core book, the Crusade pack, and "Eternal War" - the Matched Play pack. These set out game-size, special rules that apply, army restrictions, etc. More packs to be released further down the line.

- Similar to content delivered in White Dwarf and Chapter Approved, but expanded upon.

- Talked to a lot of Matched Play players about "solving the meta" - effectively, preventing people from gaming the system. Keeping the scene fresh, forcing players to actively think / maximise lists without subscribing to specific list types.

- Games designers want to give each mission pack a "theme" - one pack is geared towards a specific play experience, and so forth. Objective-based, kill-based, etc.

- Built around giving a balanced play experience, but they are intended to be thematic and align with what your faction might be doing.

- Actions; in practice, these are fluffy rules whereby the unit gives up the opportunity to shoot to do a specific action to generate additional VPs; examples include raising a banner, hacking a teleport homer, destroying a shrine, psychic actions, etc. There are set conditions that must be met, and they tie in to secondary objectives.

- Trying to avoid situations where a player is so far behind that they can't win - VPs are capped at certain stages (e.g. by certain actions), and past a point the player can't earn anymore. At that point, one player that has capped may prioritise preventing the other player from scoring more VPs.

- Ultimately, it's about introducing as many meaningful decisions into the gaming space for the players as they possibly can.

- Points Values; points have been entirely re-worked. Units, weapons, etc - everything has been touched. Some weaponry has gotten better due to the new Blast ability, and has consequently been re-balanced as a result. On average, they've gone up - a bit more similar to the start of 8E. Don't assume anything based on a current points value; the universe has changed. A WarCom article will be up later, maybe with some examples!

- Aim was to make it a more user-friendly experience when writing an army list - work has gone in to tidying it up, preventing gratuitous amounts of page flicking. Worked closely with LVO, Nova and AdeptiCon (yuck) to make it straight-forward.

- broadly speaking, they still work the same as in earlier editions - spending them on strategems, placing units in strategic reserves, etc. Major changes are in how you earn them.

- In some missions, you'll receive additional command points during the Command Phase, helping to spread them out across the course of the game.

- detachments cost CPs, however your warlord can refund the cost if he's in the core detachment - you can also pay for detachments from allied factions.

- factions have specific army-rules that interact with command point generation.

- Transports have been tweaked - they no longer take up slots, and one can be taken for /every/ infantry unit in the army.

- all new Matched Play rules are carrying over.